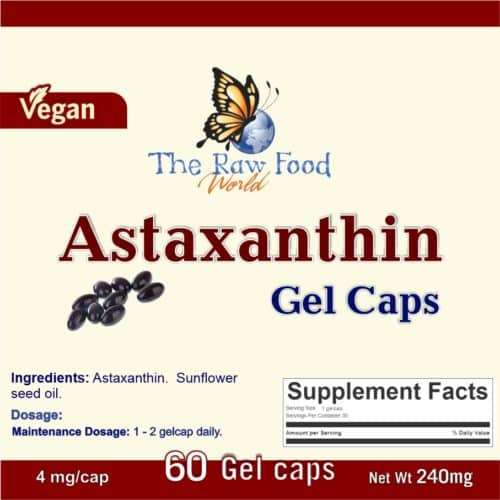 Lately, I’ve been having a hard time reading small writing on labels, and on occasion I have to ask my daughters to tell me what a particular number says. This is probably a result of many decades worth of working on a computer for a huge part of my day. Anyway, this spurred on a crazy researching frenzy on what I can eat and take for vision, which we are going to talk about today. I am super excited about this!

In fact, Doctors say that there is no treatment for certain eye diseases and injuries such as Age-related macular degeneration (AMD), retinal photic injury, and other eye diseases that are induced by free radicals. Therefore, investigators studied the role of antioxidants in preventing or improving upon these diseases with great success.

Carotenoids, which all have antioxidant properties, can some times play a part in protecting the eye from free radical damage. In order to be of any use to the eye though, carotenoids need three special properties that only a few possess. They must be able to cross not only the blood-brain barrier, but also the blood-retinal barrier to gain access into the eye. Both of these barriers are in place to protect these areas from potentially harmful substances present in the blood. Lastly, we need to find a carotenoid that doesn’t cause any adverse effects to the eye once it crosses the Blood Retinal Barrier.

For example, the carotenoid, canthaxanthin, was found to cross the blood-retinal brain barrier and reach the retina. However, an undesirable side effect in individuals that ingested canthaxanthin at high doses for an extended time was the formation of crystalline canthaxanthin deposits in the inner layers of the retina. It decreases eye adaptation to the dark, and may take several years to dissolve those formed crystals.

Scientists therefore looked at which other carotenoids from our Human Serum were already located in the retina. Of the ten carotenoids found in human serum, only two, zeaxanthin and lutein, are found in the human retina. Zeaxanthin is the predominant carotenoid within the retina. Therefore, the eye preferentially assimilates zeaxanthin over lutein in the macula and also selectively concentrates zeaxanthin, which is a more effective free radical scavenger than lutein, in the center of the eye.

People who eat foods rich in Zeaxanthin, were found to have a 50% less chance to end up with cataracts.

On this same USDA website, you can do a component search just for zeaxanthin and Lutein by clicking the link here. The big winner for Zeaxanthin is spinach, and the rest are much less. However, from researching the internet, it seems that dark leafy greens have the most of it. Kale is supposedly the best, Brussel Sprouts, and corn are pretty darn good, eggs along with many vegetables such as basil, parsley, leeks, peas, lettuce, and broccoli are kind of decent.

Zeaxanthin is also loaded in our Marine Phytoplankton Nannochloropsis Gadtana Strain. While it has way more Zeaxanthin compared to all of these other foods gram per gram, since the dosage is just 1/16 – 1/8 of a teaspoon, you are getting even more Zeaxanthin from spinach or kale if it is a good cupful. I just get concerned if the spinach or kale is not juiced, blended or cooked, that you may not unlock the nutrition to its full potential. The Zeaxanthin doesn’t seem to get damaged with heat. I just love how this Marine Phytoplankton strain continually covers our grounds here with all sorts of different kinds of nutrition.

This is all great stuff, for our eye health, and I am eager to take the Marine Phytoplankton and incorporate more of these foods such as steamed vegetables. However, I want to really target eye health with a superfood component that will blow all of these Zeaxanthin stats away into oblivion.

As I went deeper into research on eye health, studies reported that the consumption of an antioxidant, such as ascorbic acid (Vitamin C), A-tocopherol (Vitamin E) or B-carotene, has the potential to aid in the prevention of eye degeneration. However, the human carotenoid, B-carotene does not cross the Blood Retinal Barrier. If you were to take a ridiculous dosage, it’s documented that maybe a minute fraction might get through.

These important basic nutrients such as Vitamin C and Vitamin E, have always been known to help with eye health, yet approximately half of all Americans age 75 and older have suffered from cataracts. We are not even mentioning the tens of other eye diseases out there. With my generation being raised up on computers, I only see these numbers going up.

Well! At the clinical studies within the patent here, Astaxanthin, which has a molecular structure very similar to zeaxanthin, was able to successfully cross the Blood Brain Barrier, and the Blood Retinal Barrier. If you have time, I definitely recommend reading this document at the above link to get the full download. It’s about a 1.5 hour read when you study it extensively, but don’t worry as that’s my job. It goes on to say that Astaxanthin is a more effective antioxidant compared to all of the antioxidants we mentioned above, including zeaxanthin, lutein, canthaxanthin, B-carotene, Ascorbic Acid, Vitamin E, and α-tocopherol. In fact, it is known that the antioxidant power of Astaxanthin is at least 10 times more powerful than beta-carotene and carotenoids like lutein and zeaxanthin, and 100 times more powerful than beta-tocopherol (vitamin E).

There are hundreds of studies on Astaxanthin, and not only does it cross the Blood Retina Barrier, it does not adversely affect the eye like canthaxanthin does. Although many of these eye diseases are considered untreatable, many of these studies, including the ones at the patent above, shows that the use of Astaxanthin not only has the potential to retard (stop and prevent) more eye damage from occurring in its tracks, but also it has the potential to ameliorate (help/improve upon) existing eye damage. I can list many animal and human studies here showing that Astaxanthin has the potential to help with cataracts, Age macular degeneration (AMD), Glaucoma, Diabetic retinopathy (DR), and much more. You can easily do a search on google to find many of them.

So I got with my algae guy, who I have been doing business with for over 20 years now. You better believe that I got the best of the best Astaxanthin here.

I just tried my sample for the first time just before writing this Newsletter.

As usual, I chewed down on the gel cap, and took this precious oil straight into my mouth. I feel so good, with really good eye focus right now. Granted, I did get a rare nap during the day today. However, the effects that I am feeling right now are incredible. I’m such a good product tester, because I am so sensitive from being on a 100% Raw Vegan Diet for two decades, which kind of forces me now to eat very little in order to be healthy and feel really good.

While I feel it is important to eat foods rich in Zeaxanthin for eye health, this Astaxanthin I believe is the best most potent Algae Superfood one can take for their vision, and we’ve got it ‘At-Cost’ today for only $10.95 each when you get a 3-pack.

One of the most important things about our Astaxanthin, which I believe no other Astaxanthin’s on the market does, is that it uses a Botanical peroxidation blocker to increase stability so the Astaxanthin does not oxidize inside of the gelcap. I believe that’s why my brain went, Bling, Bling! After taking it.

Without a doubt, I believe that our Astaxanthin is the best product that a person can take for their eye health. If you can afford it, our two other Marine Phytoplanktons can also support our eye health. The Nannochloropsis Gadtana Strain due to its Zeaxanthin levels, and the Tetraselmis Chuii SOD strain due to the high levels of SOD within it. At that patent link above, it states that, “the combination of continuous and/or excessive exposure to light, and the relatively high concentration of oxygen in the eye, generates singlet oxygen and other free radical species.” If you remember, SOD protects cells exposed to oxygen like our hair and skin. Our eyes are no different, are exposed to oxygen, and the Tetraselmis Chuii Marine Phytoplankton strain can also be very beneficial for our vision.