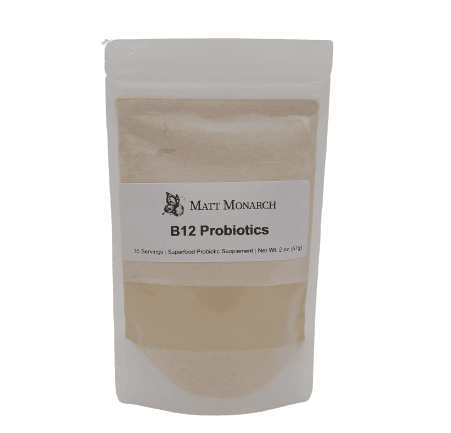 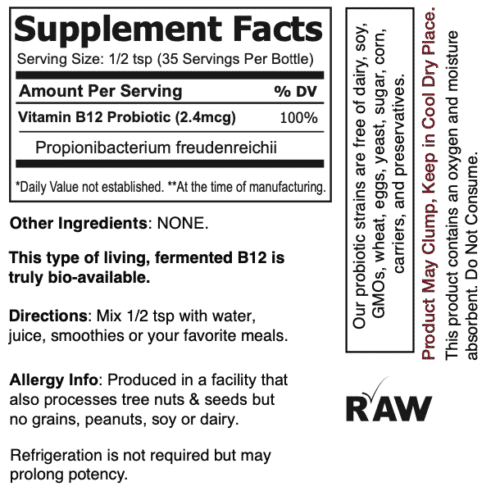 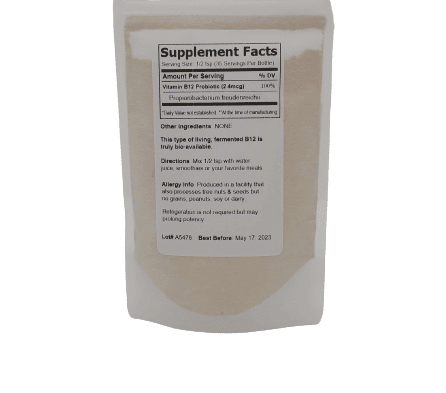 Yep, the doctor is weaning me off of all my meds as we speak, this is happening due to these few products that I have discovered, which has never been seen before on the market.

As you know, I dropped to 96 pounds and almost died and these products literally saved my life.

This is good for everyone…

Get ready, because these new products which have never been seen before is going to start an entire new industry!  First I will carry it at the highest potency that can never be reproduced, and then you’ll start to see the natural doctors will start to talk about it, and then everyone will have a watered down version of it with fillers.  I go directly to the source and add nothing to the ingredients.

The first product is a probiotic called Propionibacterium freudenreichii…

I know that this is going to sound absolutely crazy, but for every gram you take, you get 1.5 micrograms of  living B12.  It’s a living probiotic, which is in its balanced fermented form, making it more bioavailable compared to any B12 on the market!  The Recommended Dietary Allowance (RDA) is 2.4 mcg/day

So… you can literally take 1.6 grams of this probiotic powder per day, and get the full recommended dietary allowance of your B12 needs, in the most absorbable form of B12 on the market.

I had pernicious anemia, and it saved my life…

This product is a miracle…

When I almost died at 96 pounds, afterwards I couldn’t walk more than 10 feet without shortness of breath due to having pernicious anemia…

Pernicious anemia happens when you have a lack of intrinsic factor, which needs to bind to Vitamin B12 for its absorption.  Whether you are on a vegan diet or not, this is incredibly important.  But if you are vegan, you should REALLY take this…. Trust me…. Now I walk a minimum of 5.2 miles per day!

The B12 patches didn’t work…. I put them behind my ear, my neck, and even on my belly where my colon was.

I was talking to a chemist who told me that people don’t need 10,000% of all those b-12s on the market today. Most of that goes right out in urine.

This type of b12 is in it’s balanced fermented form, making it truly bio-available.

The B-12 is human active Hydroxocobalamin, and this is unheard of…

This probiotic has GRAS (Generally Recognized as Safe) status granted by the FDA, and QPS granted by EFSA allowing for it’s direct use in fortifying food and feed preparations with B12, because it is is an efficient and only known producer, reaching cobalamin levels of 15 µg/mL, which can be seen at the clinical study here:

It also states in the clinical study above:

Due to the complexity and cost of the chemical synthesis of cobalamin, which requires approximately 70 steps, its industrial production is exclusively through microbial fermentation, most commonly by Propionibacterium freudenreichii [3].

In the above link it also says that The complete biosynthesis of cobalamin requires approximately 30 gene products [3], but it is the final steps of the pathway, namely production, activation and attachment of the lower ligand that decide whether the final product will be an active vitamin B12 or an analog.

It was shown that the consumption of this bacterium modulates the gut microbiota, which makes P. freudenreichii  both a probiotic and a prebiotic (R).

P. freudenreichii  was effective in the treatment of mild to moderate ulcerative colitis in a human pilot study (R).

A component from P. freudenreichii  suppresses the production of proinflammatory cytokines and attenuates colitis in mice (R).

3) P. freudenreichii  May be Beneficial in IBD

P. freudenreichii  accelerates the healing in rats with colitis (R,R).

These two clinical studies show that this probiotic has shown good constitutional survival under digestive stress and their ability to survive low pH conditions of the stomach and exposure to bile. This gut survival  has been demonstrated in vivo in humans.  High levels of propionibacteria has been detected in feces which provides further proof that it can survive gastrointestinal transit.  Once consumption of the dairy propionibacteria ceased, levels in the feces declined.

And Here’s just a quick run down of what other clinical studies show it does.

Ohhhh and check this out…

ability to bind to heavy metals

In addition to its widespread consumption from Emmental cheese, Propionibacterium freudenreichii has received the “Generally Recognised As Safe” (GRAS) status and has been granted “Qualified presumption of safety” (QPS) status from the European food safety authority.

Lastly, there are no indication of side effects from consuming this product in any of the human trials.

You simply add water to it and bam, you are done….

This is literally… the best B12 product in the world!

Here is product number two, which has never been seen before on the market, and has equal importance in helping heal me from my disease…

And the third product…

Remember all that stuff I talked about how the b12 probiotic enables other probiotics to grow and work more effectively.  This 3rd product is a probiotic formulation to go in conjunction with the B12 probiotic, which will enhance the growth rate and effectiveness of the probiotics in this formulation by 10-Fold plus.  It’s my Probiotic Synergy Blend.

There is a forth product, but that is going to take me a month or so to formulate…

As usual, I offer new items ‘At-Cost’ for everyone to try.